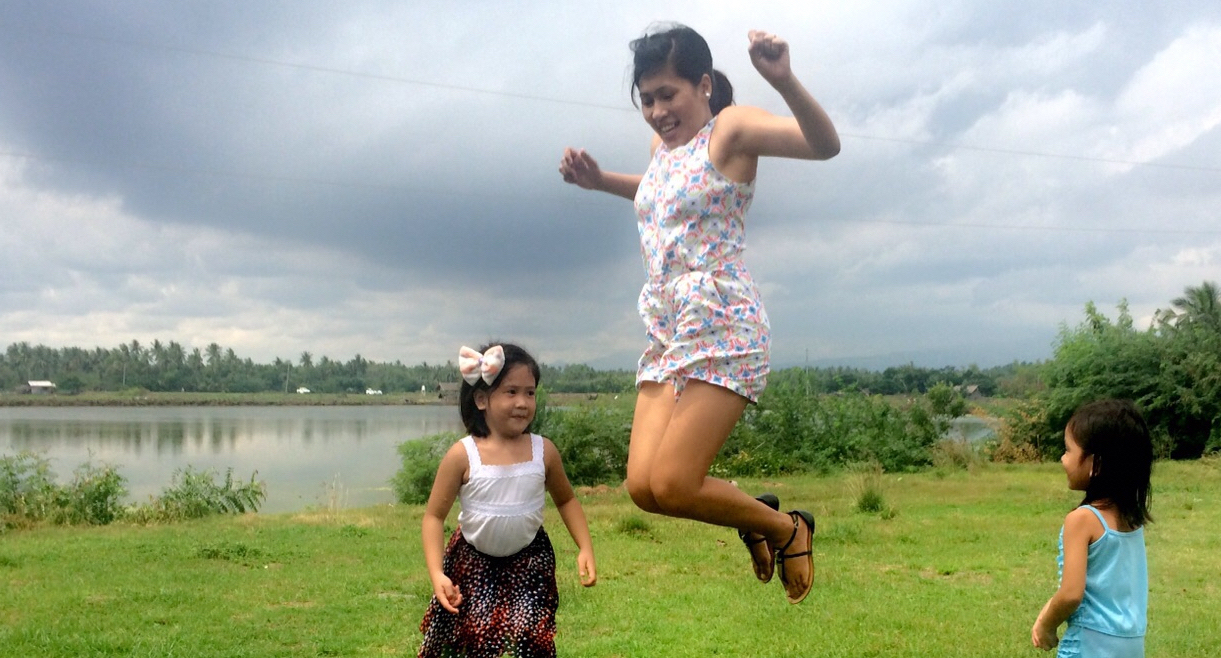 The house in Royal Valley was the same. With a doorway missing its door and a window frame without any glass panes, the tiny house offered little separation between an inside and an outside world. Moist sea air settled in the living room, bedroom, and kitchen. Noises were as loud in the bedroom as they were in the street. Animals from the neighborhood wandered in and then walked out. But the atmosphere on this late evening in October, I realized, despite the familiar sounds, was very different.

It was a Sunday, a few hours after sunset. A couple of hours before, I had exited a Cebu Pacific airplane and entered the terminal of the small airport 10 kilometers northeast of downtown Davao. I was back in the capital of Mindanao, the most impoverished and southernmost of the Philippines’ three principal islands.

Inside the living room, my eyes could detect only vague shapes in an almost complete darkness. After a few seconds, they were able to distinguish an object on the floor next to the wall. It was Jogie, lying on a mattress with her face turned toward the dark wall.

“I have a fever,” she said, turning back toward me and adjusting a square bandage on her forehead. She switched on a small, shadeless lamp next to the mattress. A single bulb cast an orange light in the moist air. Above her, attached to the wall, the new air-conditioning unit emitted cool air and a low humming sound. The machine was small, but effective. The air in the room was much cooler than it ever had been before. Usually the heat and humidity inside were extreme.

I sat in the same plastic chair I had occupied on prior visits. On this night in late October, though, I wondered if this visit would be my last. Jogie was fighting, but the problems arising from the cancer in her cervix were increasing. The pain was more severe; her voice, once so strong, now was much weaker. Jogie’s decline coincided with sobering news from recent reports on cancer. For example, the American Cancer Society and the pharmaceutical company, Merck, had released a study, “Global Burden of Cancer in Women.” The number of women who will die from cancer each year, according to the report, will rise from 3.5 million in 2012 to 5.5 million in 2030, an increase of 60 percent in two decades. Where many people had assumed the death rate would drop, with advances in medicine, it rose.

Cancer kills one in seven women worldwide, making it the second most lethal cause of death after cardiovascular disease. The report compared data for women with cancer in a developed country, such as the United States, to data for women with cancer in a developing country, such as the Philippines. In developed countries, breast, lung, and colorectal cancers were the most prevalent; in developing nations, breast, cervix, and lung malignancies were the most common. But in 39 of the poorest nations cervical cancer was at the top of the list. At 33, Jogie formerly had operated a modest business selling health and beauty products over the Internet.

The oldest of five children, Jogie had lost her father when she was nine. His death from a gunshot wound to the head was sudden. While her mother, a woman with little education, took whatever jobs she could to support the family, Jogie took care of her three sisters and one brother. When Jogie was 19, she decided to move to Japan to start a career in Tokyo’s karaoke bars. Then she learned the Japanese had cancelled the visa program for workers from the Philippines.

Jogie moved to Manila, the Philippine capital, on the island of Luzon, where she lived for the next 12 years, working in various call centers providing customer service. Now Jogie lay on a mattress under her mother’s roof, too sick to take care of herself. Globally, cervical cancer is the fourth most common cancer and the fourth leading cause of death among women. However, in poorer nations, it’s the second most common cancer and the third leading cause of death. In fact, almost 90 percent of all deaths due to cervical cancer occur in developing countries, such as the Philippines and Malawi, a country in southeastern Africa.

Medical researchers now consider the human papillomavirus, or HPV, transmitted through sexual intercourse, the cause of cervical cancer. More than a hundred types of HPV exist, but only a few of them cause cervical cancer. The International Agency for Research on Cancer has classified 12 types of HPV as carcinogenic for humans. Of these 12 types, HPV 16 and 18 are the most common, causing 70 percent of all cervical cancers. Diagnosis for a Poor, Young Woman

“Yesterday I went to the hospital,” said Jogie, “to get the results of my latest urinalysis. I have an infection.”

A small child burst into the room, almost falling with every step she took. It was Cookie, the daughter of Jogie’s youngest sister, Mabel. Suddenly the little girl stopped, three feet in front of me. She stared at me, uncertain what to do next. The last time I had seen Cookie she was not yet walking. Now her jet black hair reached almost to her shoulders, and her big brown eyes focused on me.

The catheter attached to Jogie deposited urine into the bag at her side. I watched the flow of yellow liquid. “But the urologist told me there was nothing he could do,” she said. “The only one who could help me now, he said, was the oncologist. I have cervical cancer, stage III b.” Cervical cancer, like other forms of cancer afflicting women, is, however, preventable. A vaccine exists to protect women against HPV. Also, screening tests, such as the Papanicolaou or Pap test, enable doctors to detect and remove pre-cancerous lesions.

The two to three generations of women around the world who have not received the HPV vaccine or who already have been infected with HPV must rely on screening tests. For such women, the objective is to check for a lesion that can progress to cervical cancer if left untreated.

The Pap test is the conventional screening method, but access to it, as to the HPV vaccine, is not easy. For Jogie, no vaccine or screening test would help her now. She needed treatment for the cancer in stage three of its four-stage progression. With radiation therapy, the oncologist could shrink the tumor blocking the flow of urine. Until then, Jogie would not be able to urinate on her own.

Jogie finally had started radiation treatment. Three months had passed since doctors at Southern Philippines Medical Center, the government hospital in Davao, confirmed their diagnosis. But for weeks Jogie had languished on a bed in the cancer ward of the hospital, receiving only pain medication. The tumor had doubled in size.

Jogie, with no money, was not a priority.

Now, with funds from two aunts, one in the Philippines and one in Germany, Jogie was able to start radiation therapy. She had a radiation session once a day, five times per week at Davao Doctors Hospital, the most modern health care facility on the island of Mindanao. She was scheduled to have a total of 33 sessions of radiation therapy. Also, she was advised to have six sessions of chemotherapy and three sessions of brachytherapy.

But Jogie didn’t have enough money. Rising Death Toll Due to Cancer

The economic burden of cancer, according to the report from the American Cancer Society and Merck, is growing every year. Expenditures for the early detection of cancer and for treatment continue to climb.

Around the world, larger cities are more likely to have the infrastructure for cancer care, as well as a higher proportion of people who could afford the care. In rural areas and smaller towns, lower-income individuals are less likely to have access to cancer care.

Due to high costs, many chemotherapeutic agents are not part of essential medicine lists in poor countries. The median number of oncology-essential medicines in a recent study ranged from 11 in low-income countries to 18 in lower middle-income and 26 in upper-income nations. Dwindling Hope for a Sick Woman

“The Baptist church next to SaveMore donated the air conditioner,” said Jogie. “Mama went to them and asked for help.” Jogie laughed. “I don’t think I could survive without the air conditioner. My stomach feels like it’s on fire after a radiation session. Once I have chemotherapy, the burning sensation will be even worse.”

“Arequa,” Jogie said, uttering a word in Bisaya. She was in pain. “I don’t know what I will do when the money for my treatment runs out.” She started to turn over on the mattress, then stopped, reaching down toward the catheter between her legs.

“My only hope is to make it through this month,” said Jogie. It was a Friday at the beginning of December. I was back in the primitive living room of the small structure on the outskirts of Davao City, in the southern Philippines. “In January, my health insurance benefits will renew with the new year,” she said.

For 2016, Jogie had exhausted her benefits from the Philippines’ national insurance program, called PhilHealth. Now she was able to pay for treatment only through charitable contributions. “I’ve completed 23 radiation sessions,” she said. “My oncologist says I need five more in December. The goal is to shrink my tumor to three centimeters by the end of the month and, then, in January to target it with high doses of chemotherapy.” I never saw any of them again.