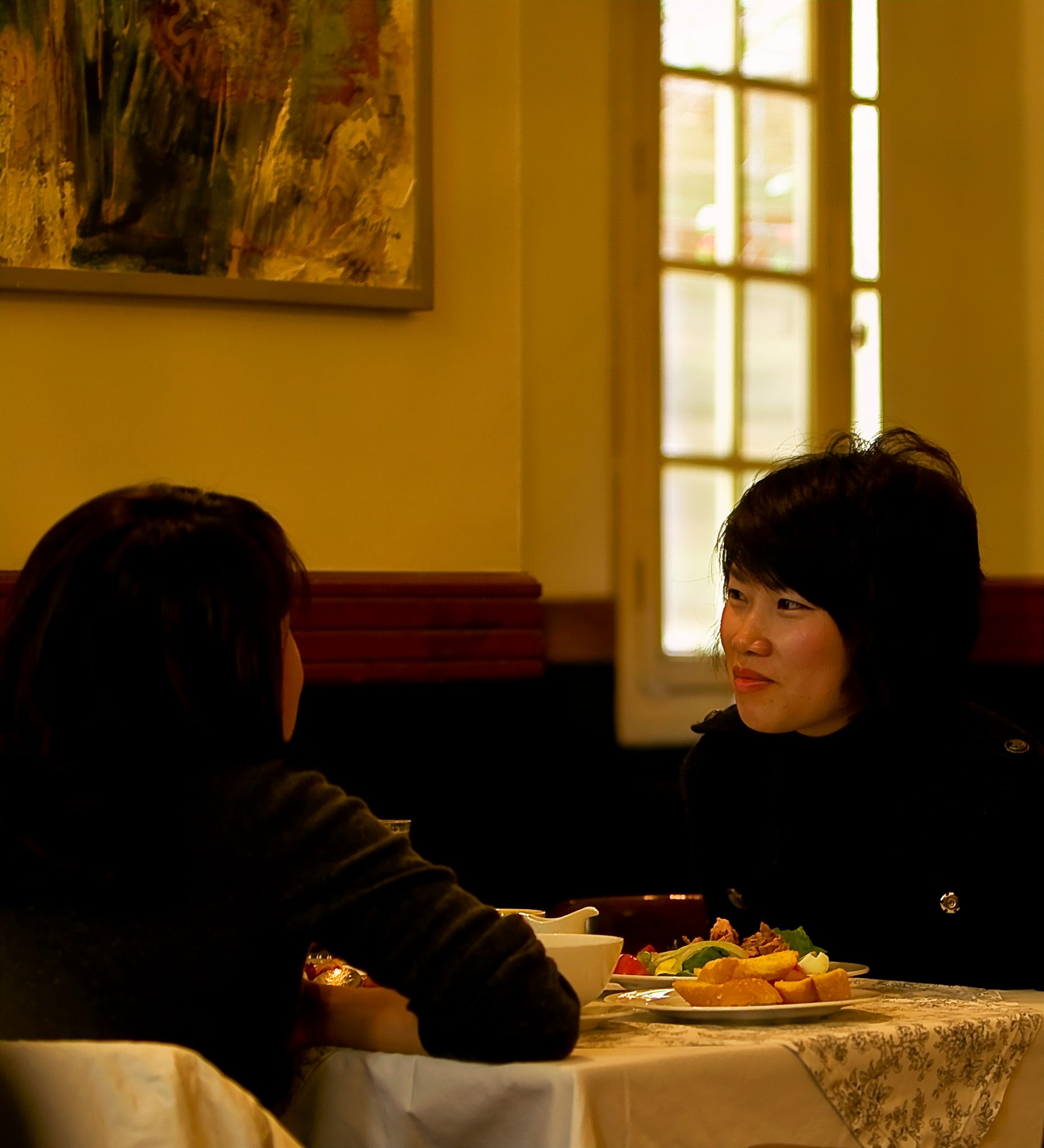 “I am 31, work full time, and have a daughter who’s ten years old,” she said. “I’m a typical Davao professional woman, I guess you could say.”

Rosalie sat across the table from me in the restaurant, Caffé Antoccino, on Guerrero Street in downtown Davao City. She moved her chair slightly to one side so that she could face the door and the street beyond. I sat opposite her next to a large window.

“What else do you want to know? I have a bachelor’s degree in communications from Ateneo de Davao University here in Davao, but I work as a civil engineer for the Philippines’ Department of Public Works and Highways…. I don’t look like an engineer, do I?” Rosalie glanced at me, but, before I could speak, she answered her own question. “I hope not.” She tossed her brown hair back with her left hand. “Well, actually, I’m responsible for the department’s contracts.”

It was lunchtime. We had ordered our food and were waiting for it.

Outside, on the streets, the temperature had risen to 92 degrees, and the sun was intense. Inside the small restaurant, a large air conditioning unit attached to the back wall operated almost noislessly. I could just make out its humming above other sounds. The atmosphere was cool and soothing.

Rosalie and Her Job

Rosalie seemed nervous and somewhat distracted. I had met her once before, about a year previously. I turned partially and looked at the calendar hanging on a wall facing a shelf of baked goods. The calendar featured a photograph of the interior of the SM Lanang Shopping Center on it. It was the newest and most distinctive, modern building in Davao City by far. The photograph reminded me that the shopping center didn’t seem to belong to a remote city on a remote island not far from the shipping lanes of the South China Sea. In the photograph on the calendar, I recognized the entrance to Forever 21, a clothing store for teen-age girls. I was surprised. I had been inside the store yesterday with Gia, who was buying a present for her niece and, also, she admitted later, for herself.

I wasn’t listening. I could hear Rosalie’s voice, but I didn’t understand what she was saying.

Looking at the calendar, I realized it was the 15th of May, not quite one week after Rodrigo Duterte, the mayor of this small city and a local hero, had won the presidency of the Philippines. It was a big event. It was also a shock. It seemed as if more time had passed, but the shock had not worn off.

I looked at Rosalie sitting across the table again. She asked, “Why are you looking at the calendar? Is it time to leave? But you just arrived. Right?”

“What, if anything, will change here on Mindanao now that Duterte has been elected president?” I asked.

Davao City, the capital of Mindanao, the Philippines’ most impoverished large island, lay 900 miles south of Manila. With almost 2 million inhabitants, Davao is the third largest city in the Philippines, but still it seems like a rural village which has grown too large and will not ever become a part of the modern world. Maybe Duterte, now the president, will usher in a golden age of modernization.

Rosalie grew serious. “We’ve been discussing the idea in the office,” she said. “No one has a good answer. We can’t believe what has happened.” Her English was correct but sometimes not what I was used to. “Of course, we hope for more resources, a much bigger budget. You know what the city roads are like. They are old, and the country roads are worse. But, right now, we can’t allow ourselves to dream about what we don’t have.”

The waitress, a girl of about 15, approached and placed a tall glass of calamansi juice on the table next to my left hand. The cool liquid tasted good, not too sweet.

Rosalie had a bottle of San Miguel Light. “Sometimes I drink a beer with my lunch if I am out of the office,” she said, noticing I was looking at the bottle, “but, otherwise, when I eat lunch at my desk, I drink water. It would be better if I went out every day for lunch. Sitting at my desk for eight to ten hours, without getting up and moving around, is bad. It makes me even more anxious. I need to get out more.” The girl returned to our table carrying a tray. From the tray, she placed before us two bowls of rice and two larger bowls with chunks of vegetables and meat resting in a cream soup. She put down two sets of eating utensils.

A phone began ringing. After Rosalie hesitated for a moment, I watched her reach into her purse, pull out an iPhone, and press it to her ear. I saw the expression on her face change. I listened as Rosalie spoke rapidly in Bisaya. I knew a few words in the language, but I couldn’t guess what she was saying or who she was talking with.

My thoughts turned to Gia, my translator who had just departed in a jeepney. She told me that she was going to her mother’s house in Royal Valley to see her sister and her new baby and that she would return to pick me up in one hour. But I knew where Royal Valley was, and I knew, because of the rural world and poor roads, that Gia would not be back for at least two hours. I decided I would catch a taxi when Rosalie and I finished lunch. I didn’t want to walk two miles in the heat and wear myself out.

Rosalie and Her Husband

Rosalie rose from her chair, suddenly paused, and then sat down again, as if she had intended to step outside but then changed her mind. She placed her phone back in her purse sat down and re-arranged herself. She said nothing. She was no longer distracted; she was self-conscious.

I assumed that the caller was someone in her office and that now she would have to leave and immediately return to work. Her office was in a building around the corner on Ramon Magsaysay Boulevard. It was the home of the headquarters of the Philippines’ Department of Public Works and Highways, a busy place.

“Well,” said Rosalie. She acted as if she were embarrassed. “That was my husband. I haven’t heard from him for six months. We’re separated, you understand. He’s a musician. Who knows what he’s been doing.” She was silent for a few seconds. She was talking to herself, not me.