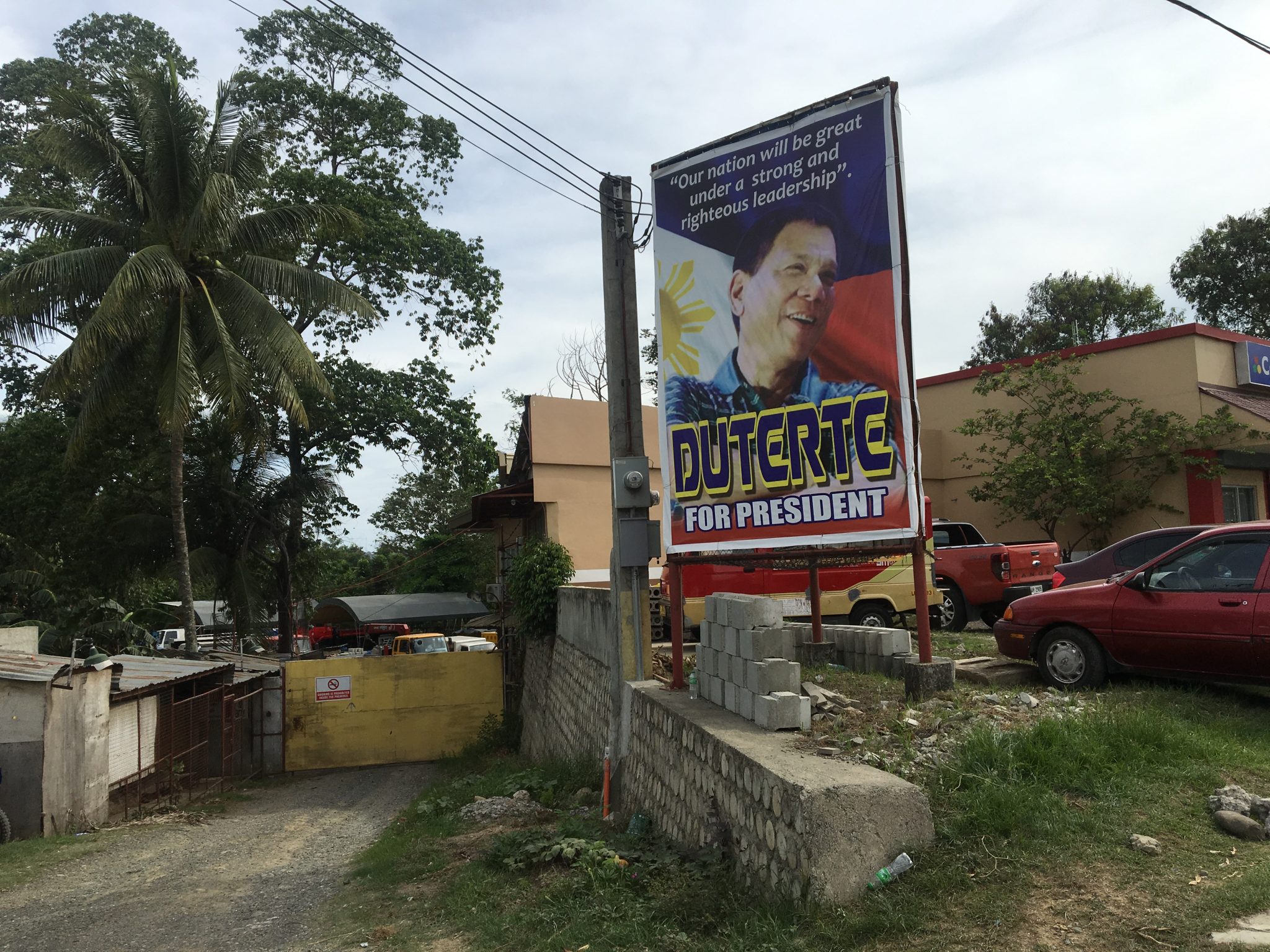 On the day after the election for president in the Philippines, three of the four losers in the race conceded defeat. The fourth, Jejomar Binay, needed two days to lick his wounds. Rodrigo Duterte won the contest for president by more than 6 million votes, a virtual landslide in Filipino national elections. President Duterte will begin his six-year term on June 30.

In Davao City, Mindanao, residents hope that Duterte, who was their mayor for 22 years, can deliver more infrastructure. Mainly, they worry about roads, sewage systems, and electricity. But, at the same time, they question whether Duterte’s new administration, unfamiliar with the political establishment in Manila, will be able to make significant changes in their lives.

As the capital of the island of Mindanao, Davao City lies 1,000 miles south of Manila, the nation’s capital. Residents of the remote outpost are accustomed to making do with little or nothing.

Rosalie Padilla, 31, a civil engineer in the Department of Public Works and Highways in Davao City, says, “We never have enough money to complete our projects. We have to cut corners, make compromises, and postpone repairs every day. Our budget shortfalls are constant. More people, unemployed or homeless, come here every year from other parts of the island. I am very tired.”

Padilla can’t imagine how the victory by Duterte in the race for the presidency will impact her working conditions. “Duterte did a lot for us as mayor over the past 20 years,” she says. “But for Duterte to accomplish anything more for us here in Mindanao, when he has to go to Manila and fight with people who have a lot of money and power…. I am not confident. He is determined; he has been successful for many years. But it will be a miracle if he succeeds in Manila. I never expected him to win the election. We knew we needed him. But, no one thought he would win.”

President Duterte, when he settles into his new office in Manila, will confront challenges to his authority from the Philippines’ ruling class. As a prosecutor turned politician from an island closer to Malaysia and Brunei than to Manila, Duterte won the election because he campaigned against traditional alliances, not because he sought to work with them.

For the preceding four months in his speeches, Duterte made an almost endless series of promises to Filipinos. He pledged to reform government, distributing revenues more realistically, and he vowed to wipe out corruption in politics. Finally, he said he would eliminate violent crime in the Philippines while ridding the nation of illegal drugs.

But in one month, in addition, President Duterte must assume the job of governing roughly 100 million people. To be efficient, he may soon have to decide whether he can work with the traditional elites, or whether he cannot. At a Rally Filipinos Show Their Support for Duterte

The new president must choose his first projects quickly. Out of all of Duterte’s campaign promises, one seems more realistic than the others: negotiating a lasting peace with the Muslim insurgents in the Autonomous Region in Muslim Mindanao.

“Duterte has been the only government official effective in negotiating with extremists over the years,” says Mark Steffen Andaya, 28, Assistant Chief Nurse at Kabacan Polymedic Cooperative Hospital in Cotabato City.

The patients whom Andaya treats every day are Muslims who share not only the details of their physical ailments but also their worries about their everyday lives, specifically about their livelihoods. “They are very poor,” he says. “They are very sincere. All they want is an opportunity to make decent lives for themselves.”

The Autonomous Region in Muslim Mindanao encompasses five provinces, Maguindanao and Lanao del Sur, along the west coast of Mindanao, and then, in addition, three smaller islands off the coast of Mindanao: Basilan, Sulu, and Tawi-Tawi. The region is by far the poorest of the 17 regions in the Philippines. It has an annual income one half that of the second poorest region in the nation.

For years, the insurgents have fought with government troops as successive presidents in Manila have ignored the grievances of Muslims in Mindanao. Duterte promises to do what his predecessors did not do.

Andaya, who, like Duterte, is Catholic, notices the respect for Duterte in the Muslim community. “I think Duterte will be the one to achieve a deal with the Muslim insurgents,” he says. “Duterte is a strong and forceful leader. People trust him to do what he says he will do.”