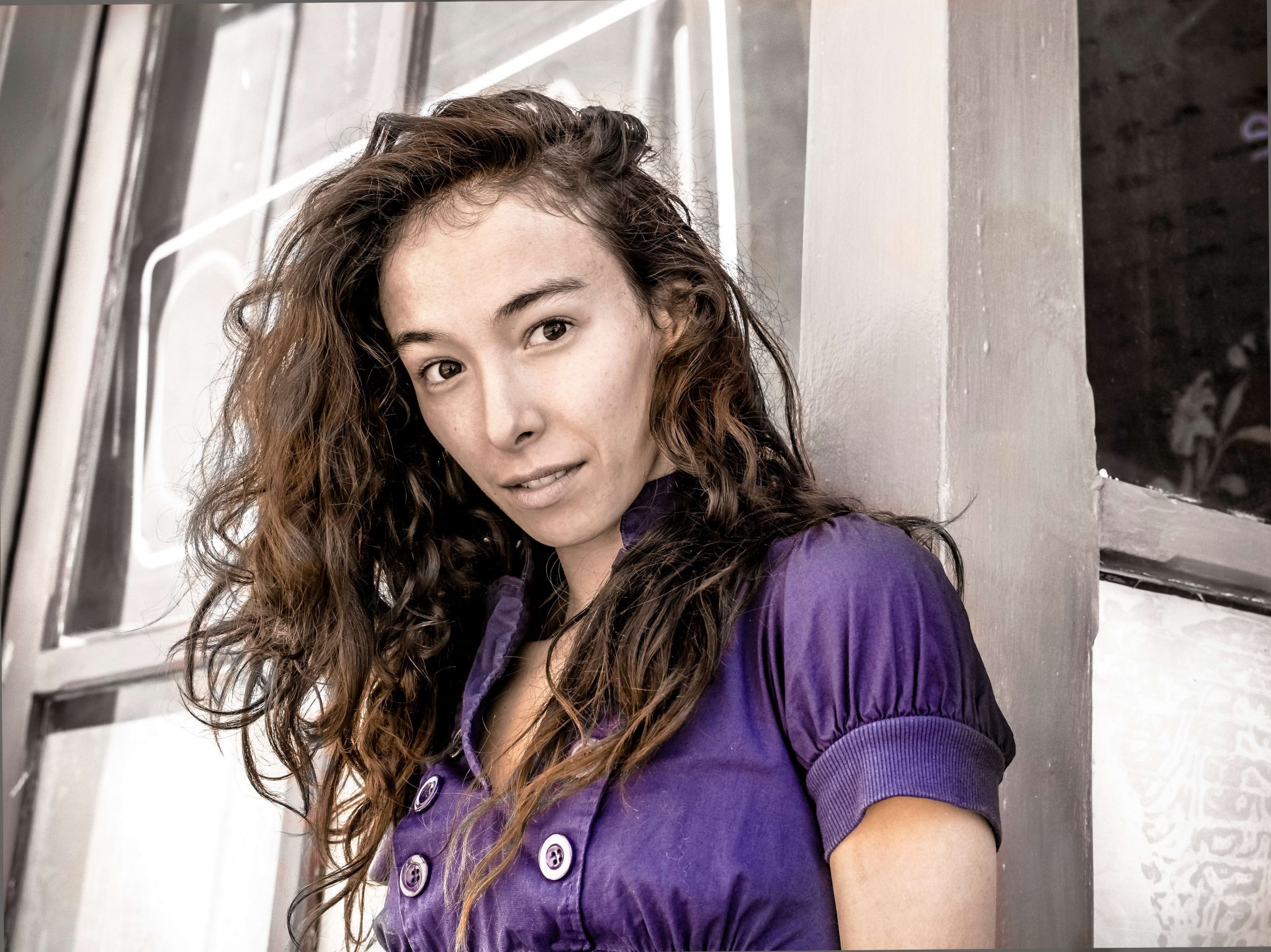 Lan pulled to the side of Hai Bà Trưng Street and brought her motorbike to a halt in a space crowded with shoppers. I sat on the seat behind her.

She walked to the counter of a small shop. She wore the hood of her sweatshirt pulled over her head and underneath her helmet. She also wore large sunglasses, a decorative face-mask, and long gloves reaching to her shoulders.

Behind the counter, a young woman in a white coat appeared. When I saw her, I got off the motorbike and parked it and stood beside Lan. She spoke in a loud voice and used her hands to illustrate her point. “A couple of days ago, he developed a persistent cough. He was sleeping under an air-conditioner and irritating his allergies,” Lan said, speaking in English for my benefit.

The pharmacy, with no door and with no windows, had only a piece of heavy canvas draped over a slender rod about 10 feet long. The sides of the shop were canvas as well. I turned and went back and sat down on Lan’s motorbike again. I couldn’t understand the rest of Lan’s conversation with the young woman in Vietnamese, and, anyway, I wasn’t enthusiastic about a natural cure any longer.

Lan returned to the motorbike. “This is it,” she said, showing me a small glass container with plastic cap on it. “Your medicine.” On the front of the container was a picture of a person’s lungs. I started to unscrew the cap.

“Not now,” Lan said, seizing the container with one hand and placing it in one of the bike’s compartments. “You need to eat breakfast first. It’s not time for you to drink it and, anyway, we also should mix it with hot water.”

Lan shot her motorbike through the foot traffic and entered Hai Bà Trưng Street. Several minutes later, she stopped the bike in front of Tân Định, a market in District 1 known for its food stalls and textiles.

“Have you ever tried Com Tam before?” Lan asked. “It’s a specialty of Vietnam.”

We sat down in a small, outdoor restaurant. In the center of my plate, only a minute later, a waiter placed a mound of broken rice topped with fresh green onions and pickled daikons and carrots. On one side, I saw a large glazed pork chop and an egg prepared sunny side up. On the other side, I saw slices of fresh cucumbers and tomatoes. “This is Com Tam,” Lan said to me.

We sat at a small metal table next to the traffic flowing along Hai Bà Trưng Street. It was 9:00 in the morning.

The source of the heat, I realized, was a makeshift grill 10 feet away. The grill rested on a terra cotta pot full of hot coals. In front of the grill stood a man with his polo shirt pulled up, exposing his belly. While he fanned the flames of the fire, he alternated between marinating pork chops and cooking them.

Around us women wearing cloth pajamas and conical hats cleared tables as customers departed. The women picked up bowls from the tables, walked into the middle of the traffic on Hai Bà Trưng Street, and poured noodles and scraps of meat through the manhole covers.

“It isn’t surprising that flooding is so bad in Ho Chi Minh City,” Lan said. “As you can see, we clog the storm drains with all kinds of garbage.”

Lan looked at her watch and stood up. “We have our heaviest rains during the summer months of June, July, and August,” she continued. “We have to roll up our pants above our ankles, put on rubber slippers, and walk carefully through flooded areas.” She paused. “I’ll take you to Ba Tháng Hai Street in District 10 during a heavy rain,” she added. “You’ll find the water above your knees.” Lan completed the 1.5-mile drive back to Hotel Vissai in 10 minutes. As she brought the motorbike to a halt on Nguyễn Văn Trỗi Street in front of the hotel, my iPhone vibrated.

Getting off the back of the motorbike, I removed my helmet. I saw a message from a number I didn’t recognize. The message was from Duy, the general manager of Hyundai-Vinamotor, who invited me to take a tour of his factory the following Monday.

I wondered where he had gotten my telephone number. Then I remembered I had given it to his secretary myself.

Before entering the hotel, I sent a text message to Karen, asking if she was available for lunch, and she replied she could meet me at Morico Modern Japanese Restaurant Café on Lê Lợi Street at 12:15pm.

At 11:30am, I left the hotel and got in Binh’s taxi. His smile was bigger than usual.

“She’s pretty,” Binh said, maneuvering the car into the stream of traffic flowing down Nguyễn Văn Trỗi Street toward the city center. I realized he had seen me with Lan.

“I don’t know what you’re talking about,” I replied. I pointed out the window. “Here come the rain clouds.” I looked at Binh. “It’s very hot today.”

Binh shrugged and started talking to me about a big Russian man, dressed all in black, whom he had taken to the airport earlier that morning. The man sounded like someone I had met recently, Emile’s boss, Andrei.

Morico Café was nearly empty. The usual customers and local office workers were absent on the week-end. I told Karen about the invitation from Duy. “I think he’s changed tactics,” I said. “Previously, he ignored me. Now, he is courting me.”

“What did you say to him on the phone?” she asked.

“Practically nothing,” I answered. “But I want to visit his factory and see his company’s new line of buses and trucks. Probably, I’ll have to answer questions about you. I’ll make up a good story.” Karen finished her seafood spaghetti and crepe cake, and then she asked me to meet her at a badminton court not far from my hotel that afternoon at 4:30pm. I didn’t want to go, but I agreed.

I finished my sashimi and iced matcha latte and sent a text message to Duy. He replied, saying he would send a driver to pick me up at noon on Monday.

My iPhone buzzed. I saw a text message from Howard, who wanted to know if I could meet him and Natasha at the Sailing Tower that afternoon.

Natasha, Emile’s fiancée—she also was Andrei’s step-daughter—had showed up in Ho Chi Minh City the night before, after delaying her arrival several times. I was curious to meet her.

I stood up from my table, went to the front door of the restaurant, and looked out. The rain clouds hung low over the city, but they weren’t ready to burst. A slight breeze was blowing. I decided to walk to the Sailing Tower, less than half a mile away.

I walked northeast on Lê Lợi Street for a couple of minutes, turned left on Pasteur Street, and walked north for another 10 minutes. When I arrived at the Sailing Tower, I passed through a set of glass doors in the lobby.

I saw Howard talking with a woman. As I approached them, I saw that the woman was about 35 years old, tall and slender, and had long, brown hair. She wore a pair of black linen shorts and a pair of black, high-heeled sandals, showing off her legs. I had never seen her before.

Howard turned toward me for a moment, and then turned back to the woman. She wore a loose gold watch on her arm and a large gold necklace hanging down over a blue silk blouse. Other women in the lobby stared at her.

At that moment, I realized the woman was Natasha.

“Here he is,” Howard said, looking at me. “We already have viewed the apartments.” Howard was referring to the three apartments which we had chosen as possibilities for Emile and Natasha a week before. “Natasha didn’t like any of them,” he said. He paused. “Except for one….”

A strange expression passed over Howard’s face. “I need to sit down,” he said, moving toward a wooden bench.

“I’ll be back in a moment,” Natasha said. She went into an office leading off the lobby. I stared at her.

Howard turned to me. “What am I going to do? Natasha likes the apartment which Emile and Andrei promised to the Vietnamese government official. But, luckily, she wants you to go with us tomorrow, house-hunting.” He shrugged his shoulders. “I guess she wants to choose her new house for herself and make us see what we should have done to please her.” Natasha returned holding a bottle of water in one hand. “The driver is waiting for us outside,” she said, extending the bottle toward Howard. “Let’s go back to the InterContinental. We have done enough for one day.”

Natasha looked at me. “Can you meet us at the InterContinental tomorrow?” she said. “I want you to help me now that I’m here.”

After Howard and Natasha returned to Hotel InterContinental, I returned to Hotel Vissai and took a nap. When I got out of bed and checked my iPhone, I saw a text message from Karen, who told me to meet her at the badminton court at 4:00pm. She gave an address next to the airport and a park, called Gia Dinh.

A few minutes early, Binh dropped me off in front of a dull, grey building at A75 Bạch Đằng Street, Phường 2, in Tân Bình District. The rain was coming down hard again.

Inside the building Karen guided me toward a group of people gathered at one end, standing on the dark wooden floor, marked with blue lines for badminton courts.

“I haven’t played in a while,” Karen said, “but I never stopped paying the monthly fee.”

“Where have you been?” said a young, blonde-haired woman, who approached Karen from the opposite direction and stopped and embraced Karen.

“Emily is from Texas,” Karen said, turning to me. “She’s been an English teacher in Ho Chi Minh City longer than I have.”

Emily wore a white polo shirt, a pair of white shorts, and white tennis shoes with white socks. She was slightly taller than Karen.

“A lot has happened since the last time we saw each other,” Emily said, looking at Karen, then at me. “Here,” she added, turning back toward the group of people behind her. “I want you to meet someone.”

A young man came up to Emily and stood by her side. “This is Cao Hoai Lam,” Emily said, putting her arm around the young man’s waist. “My favorite warrior,” she added, gazing into his eyes for a few moments. “He’s a captain in the Vietnamese army.” An American Teacher in Vietnam

The medicine I had taken in the morning wasn’t helping me. In fact, I was feeling worse by evening.

When I returned to Hotel Vissai around 7:00pm, I decided to go for a swim. In the swimming pool on the 4th floor, I moved slowly through the water for 30 minutes. I felt terrible.

A violent coughing attack shook my body as I emerged from the water and moved toward a foldout chair on the concrete deck.

Lan appeared next to the chair. “Since the medicine this morning didn’t work,” she said, looking down at me, “I brought you something else.”

Lan removed a small vial with clear liquid in it from her pocket. “This one is much stronger,” she said.

I took the vial from her and stared at it. “Which kind of plant is it from?” I asked.