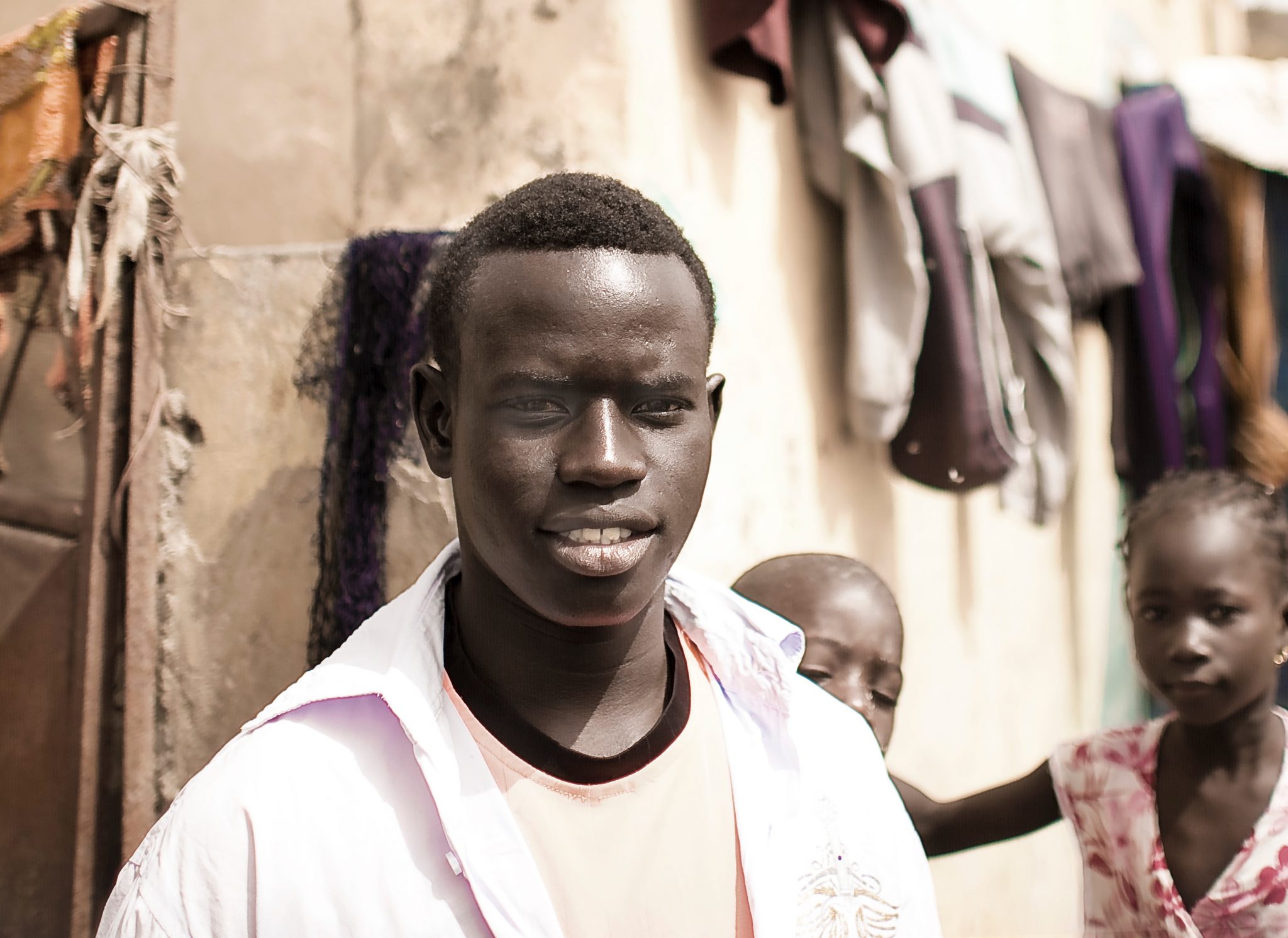 Under Cover of Night

Rain falls. Gustavo can hear it. The drops pound the glass of the bar’s lone window, closed to the black night beyond. But what happens here no longer matters to him. He is leaving.

The television in front of Gustavo displays video and projects audio from a news program. He can see a woman—young, pretty. He can hear her voice, too.

The woman delivers a report from the newsroom of one of those international networks. She speaks in careful English, with an American accent, as she recounts the outcome of a vote at the United Nations. The Russians form the primary opposition to a proposal by the Americans….

Gustavo’s gaze shifts to the ceiling above the bar. A large fan turns slowly on its axis. His mind, though, has started racing again, like before. Will they let me leave Senegal? “The Russians claim….” I just want to leave this place. “The Americans argue….” I just want to go home.

Gustavo’s gaze shifts back to the television. The young, pretty news anchor now has an expression which contorts the features of her face. “According to various sources, the president of Russia will oppose any attempt.…” She isn’t so pretty any more, he thinks. What time will the car come for me?

The table next to his is empty now, Gustavo realizes. A few minutes ago, an old, fat European man and a young, slim Senegalese woman were sitting there.

“Shocking news now from Rome….” Will Bernard remember to do what I asked? “Italian authorities are announcing they have found the body.…” Will Bonifacio and Francisco be able to protect me?

“Gustavo.” What is left for me to do? “Gustavo.” Nobody can save me now. “Gustavo.” They will come for me. “Gustavo!” Who is calling me?

Gustavo’s gaze shifts, at last, from the television toward the voice. Three Boys in a Village

Bernard stands next to the door of the bar. “Gustavo, the car is waiting. Please. Come with me. I will make sure you arrive safely at the airport. But, we must leave now.”

“Yes, we must leave now.” This time it is Gustavo who speaks, but his voice, as it issues forth into the room, surprises him. He feels….

Gustavo starts to rise from the chair, and his gaze shifts again. He sees the glass. It contains a liquid, a clear one. The sight is a familiar one, a comforting one.

He stands, fully extending his frame, which measures almost six and a half feet, and contemplates the glass. The glass, like its liquid, is clear. If only I could….

But they will have to find me.

Gustavo stares at the liquid in the glass. The feeling becomes stronger. It seems to surge through his entire body. He turns and starts to walk toward Bernard, who still stands, waiting, in front of the door.

It is the door, Gustavo knows, to the world beyond. If he passes through it, he knows, he will be outside, no longer enclosed inside the bar of the most luxurious hotel in all of Dakar, where all of the important people come to stay….

Inside life embraces him. Outside rain falls. Outside death…. Gustavo stops. He stops moving. I know…. I know what I am.

Gustavo turns, again, and in one fluid motion he reaches the table, grasps the glass in his left hand and moves it to his lips—and pours the entirety of its contents down his throat, thrusting his head backward and slamming the glass back down on the table next to a bottle. The television now displays an image of a small group of middle-aged men wearing suits with overcoats and standing next to five or six younger men wearing elaborate, in fact quite colorful, police uniforms. The audio, too, is clear.

One of the men in suits is talking, in English, with an Italian accent, recounting the details of the discovery of the body of a woman…..

Gustavo, at that moment, becomes still, the fires raging across the landscape of his body halting, the thoughts racing inside his mind ceasing, as the television shifts from an image of the Roman policemen to an image of the woman….

Gustavo jerks his left arm back toward the table, his left hand hovering for a moment above its surface before grasping the neck of the bottle, which is made of a dark, brown glass.

He tips the dark bottle toward the clear glass next to it, pours the remaining contents of the bottle into the glass, and grasps the now full glass in the fingers of his right hand.

You needed me, but I abandoned you.

The bottle slips from the fingers of Gustavo’s left hand and falls to the ground. His right hand moves the full glass to his lips and pours the entirety of its contents down his throat, just as before.

Gustavo slams the glass back down on the table, also just as before. I am a famous artist. I don’t have to prove anything—to anybody.

Then Gustavo’s gaze falls on the brown bottle, which stands—intact—in an upright position on the stone floor directly below the tips of the fingers of his left hand, which hangs in its previous position next to his left hip, as if he had placed the bottle in that position instead of allowing it to slip from his fingers and fall to the ground.

Gustavo looks down, but he can’t believe his eyes. He should be seeing shards of brown glass strewn across the hard stone. He looks to one side then the other. He turns back toward Bernard, the man who has been his assistant for … how long?

For as long as he can remember. The liquid moves through Gustavo’s body, but it has yet to reach the depths of his being, where it will deliver the strength he needs….

Gustavo knows what awaits him when he steps through the door behind his assistant—and into the dark world beyond. He knows that he will have to confront whatever—whoever—comes to meet him.

The liquid—all at once—infuses Gustavo’s body, fortifying the blood coursing through his veins, delivering the strength he has come to expect. But I will meet these … who are they? Who would challenge him? Is the world not changing, the power in it shifting from old, crumbling alliances to a new order? Is it not beckoning to people with the ability to see—truly to see—the world around them? People like him?

Gustavo walks toward the open door. Bernard allows him to pass and then follows behind him. Nobody sees them leave. The bar is empty now.

“Bernard, please confirm that my sleeping pills are in the front pocket of my carry-on bag. Also, I will need the note with the dosage information from the doctor. He tells me exactly how many pills I need to take. I emphasized very clearly what I want.”

As Gustavo passes through the open door, the tip of his left shoe hits the stone of the floor which protrudes slightly at that point, and he stumbles, falling forward so that Bernard has to grab his right arm—preventing him from falling to the ground.

Gustavo regains his balance and stands up straight, not moving for a few seconds as Bernard still holds on to him by his right arm.

Gustavo looks behind him into the empty bar. I don’t need anybody else. I don’t care about anybody else. The rest of the world can go to hell. What do I care? They can come looking for me. They can try to find me. Young Woman Shopping in the Market

Bernard looks straight ahead. He looks like a man who wants nothing more in life at that moment than to help the man next to him walk the final steps to his car.

The car waits only twenty feet away, next to the edge of a bluff overlooking the Atlantic Ocean.

Both of the men can see the long, dark sedan, the orange globes of its parking lights burning behind the falling drops of rain and the two doors of its back seat opened as widely as the two back doors of a long, dark sedan can be opened.

But none of them will find me. Gustavo moves through the night, followed closely by Bernard. Nobody will find me.