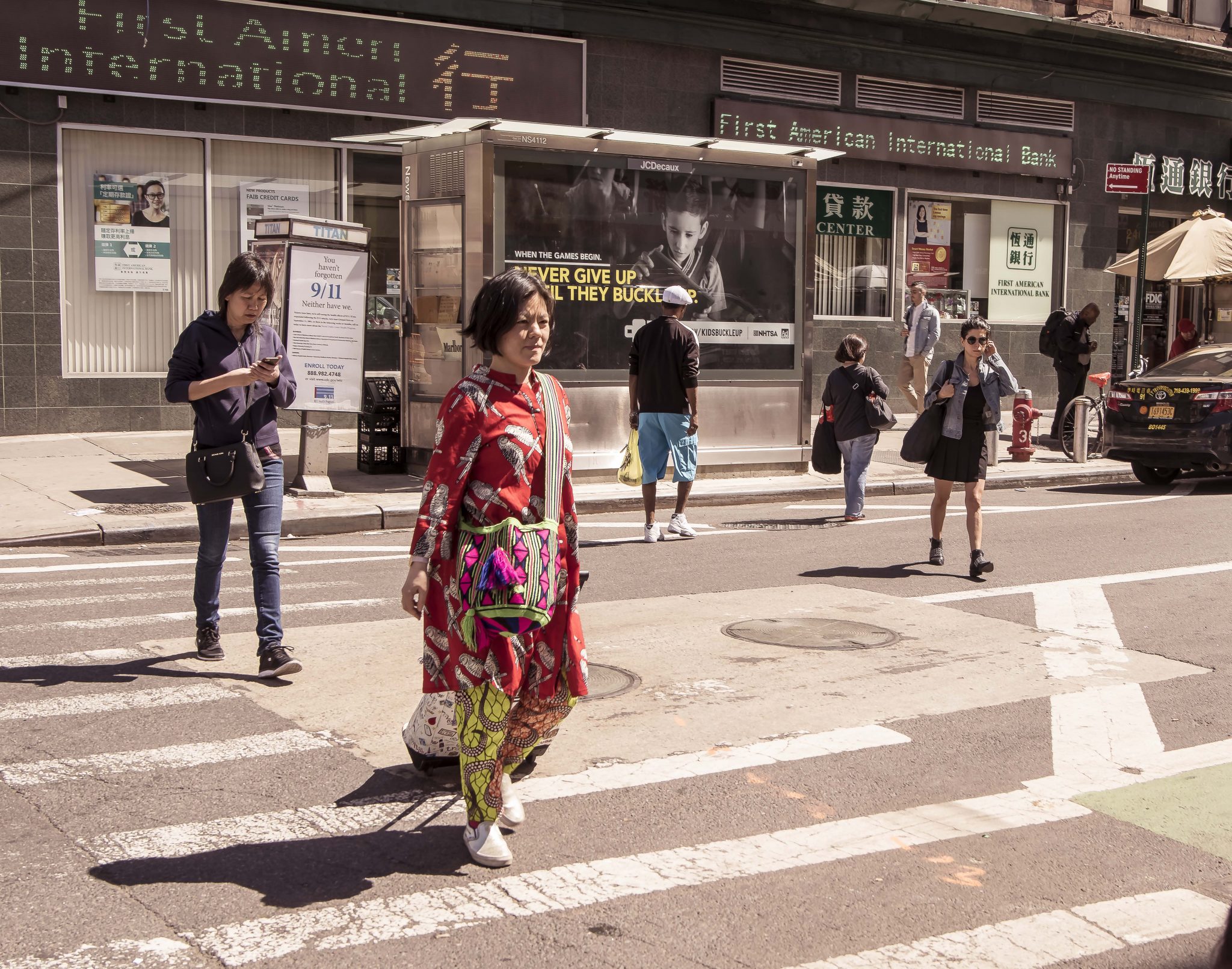 MoMA and the Met in NYC

It was Wednesday, May 2. I had arrived in New York City, or more precisely lower Manhattan, the night before.

I got up on Wednesday morning and ate a big breakfast (eggs, sausage, yogurt, bagel with cream cheese, and coffee) at the BW Bowery Hanbee Hotel on Grand Street, near the corner of Bowery. I left the hotel at 9:00am, feeling a little bloated. I walked 2 blocks, bought a half price ticket for $2.75 at the metro station on Grand Street, and hopped on the Orange (or the D) line at the Grand Street Station. I transferred after a short ride to the Lafayette station, took the Green (or the 6) line, and proceeded on a long ride to the 77th Street Station on the corner of Lexington.

On foot once again, I sauntered several blocks. The sun was out and shining brightly. Beautiful women were walking their dogs on every street. But I was pre-occupied, thinking about the article I had just submitted and looking for a cafe and a latte.

In a coffee shop, I talked with my assistant in California, giving him directions for posting my new article on Dumbarton Oaks, which I had sent the previous day from Washington, DC. I wanted to make sure he had placed the images of pre-Columbian artifacts and beautiful gardens in the right order. Most importantly, I wanted the captions correct.

Back in California, my assistant, Chuckie, said, “I understand your directions. I will post the article within 15 minutes. You’ll be able to see all of the cherry trees in blossom on your iPhone.”

After walking another 2 blocks and reaching the Metropolitan Museum on 5th Avenue, near 77th Street, I had made up my mind to see the show, “Public Parks, Private Gardens from Paris to Provence.” It contained many impressionist works from the 19th Century, including ones by Monet, Manet, and Georges Seurat, the most notable being Seurat’s “Sunday Afternoon.” But, as I had noted before, they all were a little hazy or indistinct. In photos, their colors always had seemed more consistent or contained. Today, it was true once again. Next, I saw the show, “Thomas Cole”s Journey: Atlantic Crossing.” Although Cole was a British citizen, he won fame as a painter of American landscapes, making numerous trips to the new World from the old one. I liked some of his paintings and some of the works by other artists following him, but, mostly, their efforts were too imaginative. They invented vistas which seemed impossible. They put people in places where they would never go.

After several hours, I left the Met and decided to go to MoMA, located on 53rd Street. The goal was now 25 blocks blocks away.

I set off through the middle of Central Park and passed by Cherry Hill. It was dotted with people eating lunch and visiting with friends. Someone was playing a saxophone. The music was other-worldly, floating in the air. The temperature was 76 degrees, perfect for an afternoon. Once I reached MoMA, I knew the shows I wanted to see. I had seen them advertised online. The primary one was the selected works of Tarsila do Amaral, the great Brazilian modernist, deeply influenced by cubism and surrealism. The secondary one was the exhibit in the main hall which seldom changes, showcasing Picasso, Matisse, Leger, and Henri Rousseau, with some of their greatest works.

But, first, I wanted to examine the work of Tarsila do Amaral, an artist whose paintings I had never seen in a large show. Tarsila lived for many years (1886-1973) and had an active career which extended for 60 of them, but she did her best, most famous works early, in the 1920s and 1930s. Her human figures and inanimate objects were rounded and always misshapen, stylistically similar to the works of Leger, with whom she was a friend. The colors in her works were radical and stunning. The other painter at MoMA whose work I liked was Henri Rousseau, because he was, perhaps, the most interesting of all. He was a so-called primitive in both style and subject matter, but, still Rousseau was a great talent. After exploring the many floors and rooms at MoMA, I caught the metro back to lower Manhattan. It was the rush hour, and all of the trains on the Green line were packed.